Does “better than” have a uniform scale? 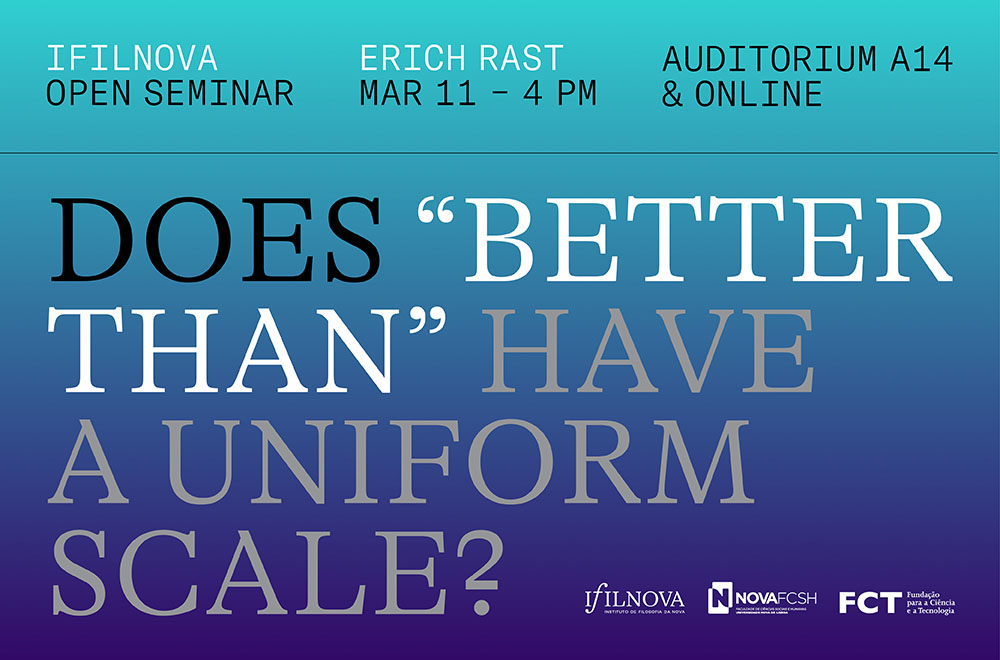 Measurement theory is concerned with the question of how to assignnumbers to entities that are measured in some way. In this area,psychologist Stevens (1946) provided characterizations of measurementscales that are still commonly used today (with minor modifications). Arelated, though first independent research program arose from acritique of the widespread naive assumption of cardinal utilities ineconomics during the 19th Century. Pareto (1900; 1906) challenged thisview, and Samuelson (1947) developed Revealed Preferences Theory in anattempt to ground utility theory empirically.


In this talk, I lay out potential connections between qualitative”better than” comparisons and numerical representations with utilityfunctions, having in mind their potential normative justification.Various suggestions are on the table. In the past, it has often beenimplicitly assumed that “better than” resides on a ratio scale.Recently, Lassiter (2017) has argued that it resides on an intervalscale and Soria-Ruiz (2021) suggests it lies on a restricted “round”ratio scale. In contrast, I argue that neither linguistic nor practicalarguments for a specific scale type are conclusive and that it is hard(if not impossible) to distinguish normative arguments for a particularscale type from wishful thinking. Expanding on Rast (2022), I proposeto consider aspects of uses of “better than” on a ratio scale when theunderlying dimension is extensively measurable and assume that otheraspects of uses of “better than” sometimes reside on a rank-based scalerelated with but not identical to Soria-Ruiz’s round ratio scales.However, there are two caveats. First, values are generally posited, notmeasured. Second, even just assuming that “better than” generallyresides on one of the common scales (as opposed to e.g. Carlson 2008;2011) involves taking a fairly strong metaethical stance since itimplies that well-known arguments against the completeness andnon-transitivity of “better than” are rejected.


For online participation, please use the following link (password: 006421).


This event is organized by P. Abreu and E. Rast. The purpose of this seminar series is to give researchers a platform to discuss ongoing work and problems in the philosophy of language, epistemology, argumentation, metaethics, and related areas. For administrative inquiries, please contact Pedro Abreu <pedroabreu@fcsh.unl.pt> or Erich Rast <erich@snafu.de>.