Translation and the Urban Landscape: the Afterlife of the Arcades 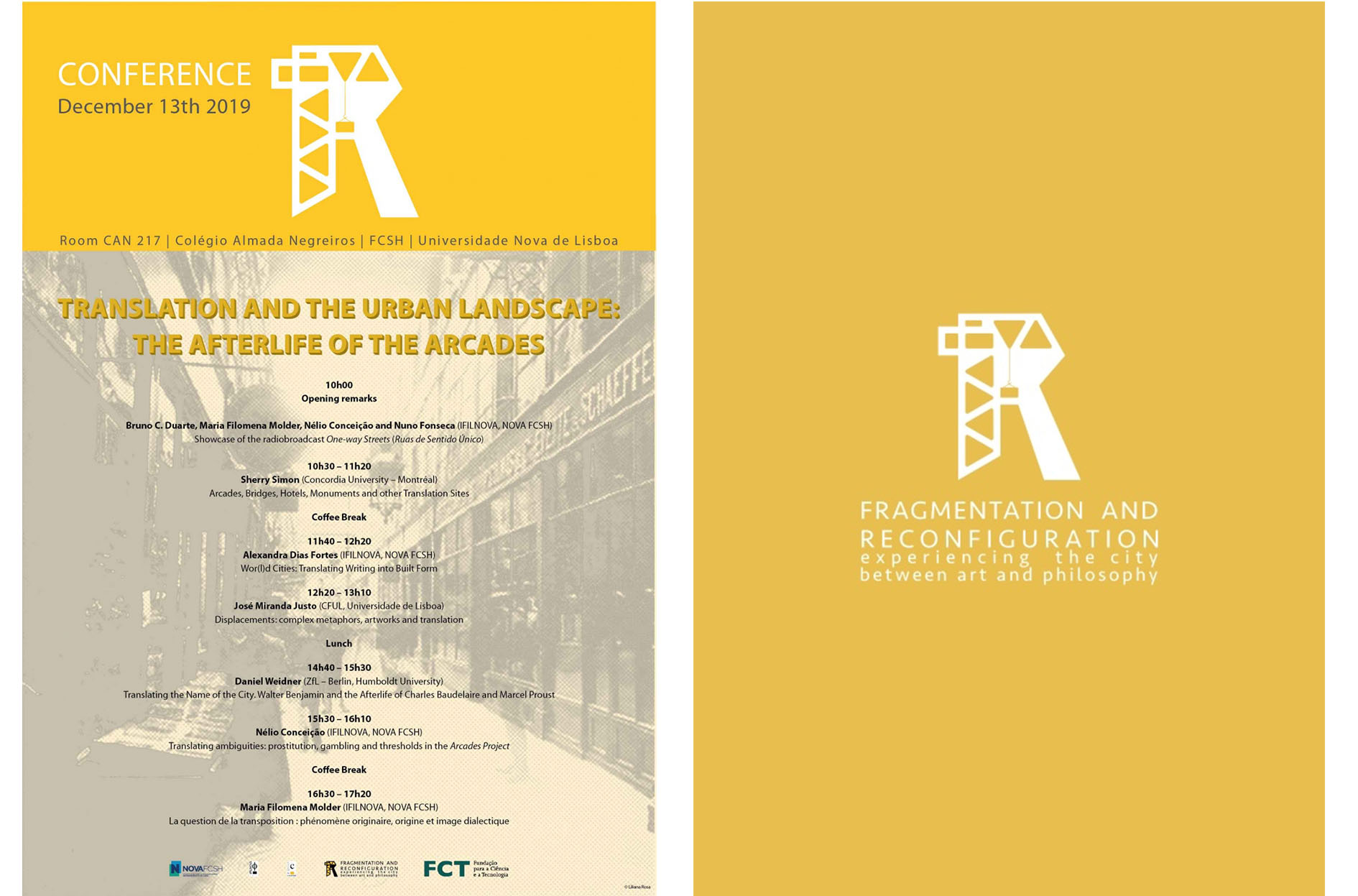 What connects the everyday life of cities to the images of language? To what extent is it possible to reflect on the city through the lens of translation, and vice versa? At such an intersection, this issue is as ancient as it is pressing. Indeed, the manifold linguistic and cultural forms that pervade today’s cities are in many respects a lively and paradoxical re-enactment of the ancient myths of the fragmentation of language such as the Tower of Babel. This conference will explore the many faces of the act of translating within and throughout the urban landscape, taking as its starting point Walter Benjamin’s Arcades Project, a philosophical reflection on the relationship between different historical epochs based on the history of the city of Paris.


What connects the everyday life of cities to the forms and images of language?
What is it that draws us to transpose or translate a work of art in space and in
time, as when we recognize for instance the history of nineteeenth-century Paris
in our present history? These and other questions can be looked at more closely
by reflecting on the city through translation and on translation through the city.
In his essay “The Task of the Translator”, Walter Benjamin speaks of the
transparency and the truth of translation by choosing the word, as opposed
to the sentence, as the “primal element of the translator”, adding that: “if the
sentence is the wall before the language of the original, literalness is the arcade”.
In turn, the conception and execution of the Arcades Project are pervaded
by the very gesture of translating. Indeed, the method of literary montage
– the juxtaposition of quotations and images in a network of nearly infinite
references and ramifications – necessarily implies the movement of translation
as much as its transformation. In fact, the Arcades Project, which roughly
coincides with Benjamin’s project to translate Proust in collaboration with Franz
Hessel, eventually expands into a broader, essentially metaphorical idea of
translation. Thus Benjamin speaks for instance of the possibility of transposing
or translating “the commodity character onto the cosmos”, and says of
Grandville’s “belated fantasies” that they transpose or “translate commodity’s
character into the universe”. Translation thereby exceeds the literary space,
and extends into the world. In the Parisian arcades – interior and exterior
spaces at the same time, pathways in which objects and experiences intersect
– the ambiguity of life in modern cities and metropolises is made visible: in
the passerby’s movement as in the displacement of historical times, in the
flow of languages and cultures as in the dynamics of tradition and modernity.
They are thus immediate places of translation, understood no longer merely as
the relation of one language to another, but as an art of space projected onto
history by what Benjamin called the continuous life, the “afterlife” of a work.

If the way we think is bound up with our language, is the way we organize space –
with walls, floors, squares, etc. – related to the way we visually express that language,
graphically, on a page? Can we learn anything about the way cities are planned by
investigating written texts?
By inquiring into the spatial arrangements involved in both practices, we can view the
design of cities throughout the world as a translation of the symbols used in writing.
Bearing in mind Walter Benjamin’s observation that “the city is a linguistic cosmos”
by virtue of “its street names”, I will explore these topics in order to finally ask: How
can the Arcades Project help us understand the continuum between the interior and
the exterior, especially in the figure of the Parisian Passagen, as well as the continuum
between writing and built form?


Alexandra Dias Fortes is an integrated member of the Nova Institute of Philosophy
(IFILNOVA) and holds a PhD in Philosophy (2016) from NOVA FCSH, with a thesis on
Wittgenstein’s thought: The importance of aesthetics for Wittgenstein (Philosophy,
method and style).
With an abiding interest in Wittgenstein, she also researches questions, authors, and
concepts that are connected with and are integral for her investigations as part of the
working group, “Art, Critique and Aesthetic Experience” (CultureLab, IFILNOVA), and
as a team member of the FCT-funded Project “Fragmentation and Reconfiguration:
Experiencing the city between art and philosophy”. The field – and the idea – of
religious naturalism also interests her, arising from a long-standing curiosity in finding
out what Wittgenstein meant when he talked about “a religious point of view”, and
due to her being a team member of the FCT-funded Project “Epistemology of Religious
Belief: Wittgenstein, Grammar and the Contemporary World”.

Daniel Weidner – ZfL – Berlin, Humboldt University of Berlin
Translating the Name of the City. Walter Benjamin and the Afterlife of Charles Baudelaire and Marcel Proust

Walter Benjamin’s engagement with the urban landscape was preceded by an
engagement with city literature, namely with the poems of Charles Baudelaire and the
prose of Marcel Proust. The paper discusses how by reading and translating these two
authors Benjamin detects the central figures and poetic strategies to represent the
urban space and develops the theoretical tools that will become essential later for his
project of the Passagen. Both the notion of afterlife of cultural artefacts, developed in
the essay on the translator, and the idea of a web of textuality organized by allegorical
techniques and the shifting function of the ego, prefigure the experience of the flâneur
and the analyst of history.

The aim of this paper is to establish in general terms an analogy between the artwork
and translation. First, the paper tries to develop a conception of the artwork from the
point of view of a philosophy of art that envisages the work of art as a transcendent
living being interconnected with humans. Both the artwork and the human beings exist
in a process of becoming that implies different kinds of displacements.
The second part of the presentation is dedicated to translation observed in the
framework of a philosophy of translation that underlines the transcendence of the
translational activity and the crucial esthetical difference that is at play in this activity.
The displacements that are observable in the field of translation are treated here in
their points of contact with those that permeate the modes of existence of the artwork.


Maria Filomena Molder is Full Professor at the Universidade Nova de Lisboa. She took
her PHD in 1991 with a thesis on Goethe’s Morphological Thinking at the Universidade
Nova de Lisboa and is an integrated member of the Nova Institute of Philosophy. She has
published several books about the relationship between arts, poetry and philosophy.
Some among them have won the Pen-Club Prize for Essay (Semear na Neve. Estudos
sobre Walter Benjamin, 2000; O Químico e o Alquimista. Benjamin Leitor de Baudelaire,
2012; Dia Alegre, Dia Pensante, Dias Fatais, 2018) and the AICA Prize (Rebuçados
Venezianos, 2017). She has also written for artists catalogues mainly in the Portuguese
context, and for Art, Philosophy and Literary International Revues, as RuDescartes,
La Part de l’Oeil, Lettre International, Electra or Diaphanes. She coordinates the FCTfunded research project “Fragmentation and Reconfiguration: Experiencing the City between Art and Philosophy”.

The materials – quotations and short remarks – that Walter Benjamin gathered
together in the konvolut O of the Arcades Project concern prostitution and gambling.
Indeed, the prostitute and the gambler are two important figures of his description
of modernity and capitalism (and modernity’s ambiguities). In that same context,
Benjamin’s sharp remarks on the notion of threshold spreads into the entire konvolut
an atmosphere of the in-between spaces. How do these figures and the very notion
of threshold allow one to understand Benjamin’s historical materialism? How do they
translate the ambiguity of dialectical images? Translation, in this sense, is a process
that makes use of a physiognomic and figurative understanding of history. One can
think of it as metaphorical, but it is literal at its very core, while also doing justice to the
“methodological” motto: “To read what was never written”.


Nélio Conceição obtained his PhD in Philosophy (Aesthetics) from the FCSH –
Universidade Nova de Lisboa (2013). His thesis focuses on the relation between
philosophy and photography, paying special attention to the thought of Walter
Benjamin, while exploring phenomenology and the work of Fernando Gil at the same
time. Currently working as a research fellow in FCSH, he is an integrated member
of the IFILNOVA – Nova Institute of Philosophy (CultureLab). He is developing
a project on aesthetics, focusing on the concepts of play, room for play and
experimentation, as well as on the philosophical and artistic ramifications of Walter
Benjamin’s work. He co-coordinates the FCT-funded research project “Fragmentation
and reconfiguration: experiencing the city between art and philosophy”.

Walter Benjamin’s arcade will be the starting point for this presentation on translation
sites—structures of the urban landscape that draw attention to and tell stories about
translation. Walter Benjamin saw the arc of the nineteenth-century shopping arcade as
a form of a literal translation. The glass roof allows light to flow through matter, just as
the literally translated text is a transparent surface that allows the light of the original
to fall onto the new version creating an interplay of surfaces. Both translator and
historian rely on the unexpected encounter of objects and words, the confrontation
of languages and temporalities, to jar the viewer into a renewed understanding of the
present. The work of translation, like the work of history, provides forms through which
the past and the present ‘flash’ into uneasy constellation. Beginning with Benjamin’s
arcade, I will explore other translation sites in the city—bridges, hotels, monuments—
that similarly foreground dissonance, communicating the affective charge of linguistic
and political conflict and unsettling narratives of identity. This tour of translation sites
will explore such cities as Lviv, Vienna and Toledo.


Sherry Simon is Professor in the French Department at Concordia University. She has
published widely in the areas of literary, intercultural and translation studies, in particular
exploring the cultural history of linguistically divided cities and the multilingual cities
of the former Habsburg empire. Among her publications are Translating Montreal.
Episodes in the Life of a Divided City (2006) and Cities in Translation: Intersections of
Language and Memory (2012), both of which have appeared in French translation,
and the recent Translation Sites: A Field Guide (Routledge 2019). She has edited or
co-edited numerous volumes, including Translation Effects: The Shaping of Modern
Canadian Culture (with K. Mezei and L. von Flotow), (2014) and Speaking Memory. How
Translation Shapes City Life (2016). She is a Fellow of the Royal Society of Canada, a
recipient of a Killam Fellowship, and a member of the Académie des lettres du Québec.